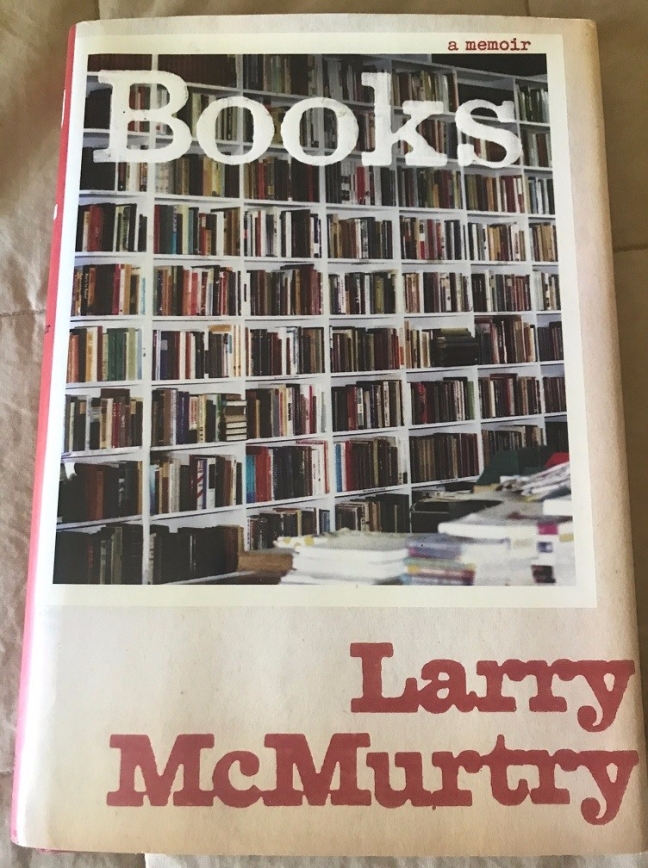 I’ve been on a kick lately reading memoirs by writers and those in the book trade whether they are book collectors, bookstore owners, printers, or bookbinders. This weekend I finished Books: A Memoir, by Larry McMurtry. The book was recommended to me last year by a rare book librarian in my California Rare Book School class at Berkeley. I had mentioned to the class that I was interested in making a life in books, collecting and selling them along with book repair. One of my peers suggested McMurtry’s Memoir.

I had never read anything by Larry McMurtry. Western novels and Americana are not my thing. I knew of him as the author of Lonesome Dove which I had not read, but had heard of, probably because of the television series they made from it. I was skeptical starting the book that I would find a kindred soul in its pages. I thought “here is another grumpy older male from the old west who probably writes about cows and horses”. (I have run into many scowling older male book sellers and scouts who are not too friendly to a younger female book hunter at sales so my cynism has some basis in experience.)

I was not sure I would find much in common with this gentleman cowboy, but I picked up the copy anyway and thought maybe I could glean some insight into the world of book selling from reportedly one of the best sellers in Texas. McMurtry owns Booked Up in Archer City, Texas. It is now on my top five list of bookstores worth traveling a long distance to visit.

Delightfully, my cynical prediction was wrong. This memoir was a wonderful love story about books and how McMurtry made a life around them. The book was completely focused on the author’s life as it related to books themselves. He mentioned his writing, his family life, and his success only fleetingly. (By that point, I had gotten curious and researched his work and biography more thoroughly online. Cadillac Jack is now in my to-read pile.)

I found similarities with the author in his stories about reading and collecting in childhood, and how he refocused his life at different stages around books. I found the information about book selling, book scouts, and operating book stores to be very informative. While many of the great bookstores that he mentions have since closed, the descriptions of how they came to be and their demise were valuable insights. I learned about acquiring stock and about finding the right people to buy your books. I made several notes from my reading and have been following up on them with further research.

As a surprise side bonus, McMurtry’s Memoir discusses his acquaintance with G. Legman, a well-known author of erotica. I had just been reading The Horn Book, by Legman as part of my early research into erotica collecting. (I’m in Silicon Valley so I’m trying to find an area to collect that I know my primary market here might go for. And let’s be honest, it’s way more fun than researching tech manuals.) McMurtry mentions a few other leads in this area of collecting that I am going to follow up on. 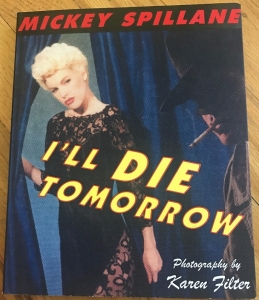 McMurtry also talks about Mickey Spillane, the author of 20th century pulp crime novels, and the representation of violence and sex in those thrillers. A few months ago, I acquired for my own collection, a fine press edition of Spillane’s I’ll Die Tomorrow, published posthumously in 2009 with great photos by Karen Filter, printed by her brother-in-law, Peter Koch over in Berkeley. Peter hails from Missouri originally and also has an interest in the West and cowboy sensibilities. It seemed a fun connect-the-dots coincidence to me.

McMurtry states in his book that the antiquarian book world has experienced a downtown and fundamental shift as a result of the Internet and increasing online book sales. He mentions several stores that have closed over the past decade. (Including Heritage Book Store in L.A. which Google Maps still has listed as existing. I know this only because last month I drove out there to find it and failed. I can’t believe I missed experiencing this store, and only by a few years!) In several cases, McMurtry’s bookstore has taken in the stock of other bookstores.

It’s not an easy business from what I can tell, but I am not deterred from designing some iteration of bookstore that might have a shot of making it out here in Silicon Valley. I have some very unique ideas that I’m mulling over, but I’m still very much in the early research stages.

To have lived a long life surrounded by books and to have the thrill of getting in new stock and the pleasure of browsing through it  – I can’t imagine a more rewarding day of work. I found McMurtry’s Memoir inspirational as well as a fun read and would happily recommend it to anyone similarly inclined to a book life.